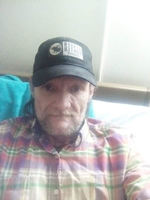 Rolly "Mountain Man" Gerald Sorrels, 48 of Ardmore departed from this life on Wednesday, June 15, 2022 in Ardmore, OK. He was born on March 24, 1974 in Ardmore, OK to Mr. Billy Gerald Sorrels and the late Mrs. Debbie Myrlene (Bryant) Holder. Cremation services are under the care and direction of Alexander Gray Funeral Home in Healdton.

Rolly was raised in Ardmore and was a man who lived life to the fullest, a man with a big adventure who would help any person in need. Rolly loved the great outdoors, being the ultimate "mountain man", loved his family, and enjoyed fishing, swimming and camping.

Preceding him in death was his mother; and a brother, Billy Joe Sorrels.

All rights reserved. This obituary is also archived at obittree.com