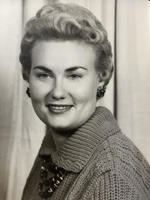 Wilson - Graveside pavilion services for Geraldine (Cottman) Hardy, 87, of Wilson are scheduled for 2:00 PM Thursday, April 28, 2022, at the Bomar Point Cemetery Pavilion with her brother-in-law, Charles Newell and nephew, Micah Newell officiating. Services are under the direction of Alexander Gray Funeral Home of Wilson.

Geraldine was born on May 13, 1934, at Guthrie to James Cleo Cottman and Sarah Rachel (Arthur) Cottman. She departed this life on Sat. April 23, 2022, at the Wilson Nursing Home.

Geraldine was raised at Perkins where she would graduate from high school. Thereafter she married Mr. Doyle Hardy on Sept. 13, 1952, at Huntsville, AR. To this union they were blessed with one daughter whom they named Cindy. They moved back and forth between Oklahoma and California while Geraldine worked as a Licensed tax accountant and as a foster mom. Doyle preceded her in death on Sept. 13, 1982.

In 1983, Geraldine would marry Rev. Sanford Newman and they shared many wonderful years together until his passing in 2002. Lastly, she married Mr. Irvin Hardy on May 21, 2005, and he too preceded her on March 28, 2015. Geraldine always loved watching birds and was of the Pentecostal faith.

In addition to her husbands, also preceding her in death are her parents; sisters, Blanche Cottman, Wanda Noles and Kathey Newell; great granddaughter Aliyah Faith Raymond and son in law, Mike Murphy.

Family visitation will be held from 6pm to 7 pm Wednesday evening at Alexander Gray Funeral Home of Wilson.

Message and condolences may be sent online at www.alexanderfuneralhome.org

All rights reserved. This obituary is also archived at obittree.com