To share your memory on the wall of Buddy Royall - Jackson, sign in using one of the following options:

Buddy was born on December 8, 1942 in Provence, OK to the late Mr. Cordy Jackson and Dolly Pauline (Tindall) Royall in Provence. He was raised by his step father Leonard Royall.

Buddy was born and raised in Provence and attended Dickson High School graduating with the Class of 1962. Buddy joined the United States Navy and proudly served his country in Vietnam. After returning from the war buddy made his home in Provence. He was a welder and enjoyed working on and building trikes. Old muscle cars and guns were a favorite passion of Buddy's. Buddy also worked for Chickasaw Nation Education Department in maintenance. He loved spending time with his family and helped raise his grandchildren. He loved to aggravate and tease people and could always pull a good prank on people.

Buddy is preceded in death by his parents and step father Leonard Royall; and a sister, Linda Tindall Royall.

To send flowers to the family or plant a tree in memory of Buddy Ray Royall - Jackson, please visit our Heartfelt Sympathies Store.

We encourage you to share your most beloved memories of Buddy here, so that the family and other loved ones can always see it. You can upload cherished photographs, or share your favorite stories, and can even comment on those shared by others. 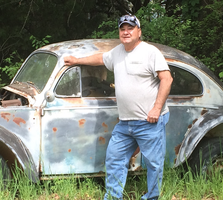