To share your memory on the wall of Verdo Gibson, sign in using one of the following options:

Verdo grew up in the Ringling area and graduated High School from Ringling Public Schools. He joined the United States Army and proudly served his country. He and Ms. Deloris Jones married on October 22, 1958 in Rexroat, OK. Together they made their home in Ringling and he worked for Stroud Lumber Co. in Ringling. He then went to work for Groendyke Transportin Ardmore. In 1965 he went into ranching at Sparks Ranch in Hennepin, OK. They moved to Carlock Ranch in Marietta, OK, later to Colvert Ranch in Mill Creek, OK and retired from Mayhard Egg Farm and Ranch in Sulphur, OK. After retiring Verdo and Deloris made their home in Lone Grove. He loved spending time with his family, especially his grandkids and great grandkids. Verdo enjoyed the outdoors, fishing and hunting. He attended Asphaltum Worship Center in Ringling.

Mr. Gibson is preceded in death by his parents; sisters, Wanda Bachhofer and Laverne Arnold and an infant brother, Donnie.

Online condolences can be sent to alexanderfuneralhome.org
Read Less

To send flowers to the family or plant a tree in memory of Verdo Boyd Gibson, please visit our Heartfelt Sympathies Store.

There are no events scheduled. You can still show your support by sending flowers directly to the family, or planting a memorial tree in memory of Verdo Boyd Gibson.
Visit the Heartfelt Sympathies Store

We encourage you to share your most beloved memories of Verdo here, so that the family and other loved ones can always see it. You can upload cherished photographs, or share your favorite stories, and can even comment on those shared by others. 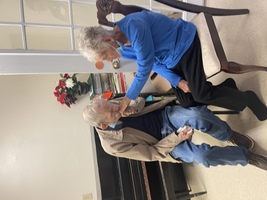