To share your memory on the wall of Michael Harrison , sign in using one of the following options:

Mike was born on July 14, 1964 at Pauls Valley, OK to the late Mr. Raymond Ray Harrison and Mrs. Barbara Ann (Goodmon) Harrison. He departed this life Sunday evening, July 4, 2021 at a healthcare facility in Ada.

Mike was a native to the Healdton area. He graduated from Healdton High School in 1983 and then attended school at OSU/ Okmulgee studying electrical application. Mike returned home and worked most of his life within the oilfield. Lastly he was employed as a crane operator for Big Iron. Mike was always full of life and enjoyed being with his friends and family. He loved to fish, hunt and go camping and was a friend to all that knew him.

Preceding him in death are his parents, and his aunt, Mollie Bell.

Survivors include his daughters, Brittani Rae Harrison of Lone Grove and Hallie Hunter Harrison of Dickson; grandchildren, Preston and Braxton Armstrong; numerous other family and friends.

Honorary bearers are his classmates of the "Healdton High School Class of 1983".

Condolences may be sent online at www.alexanderfuneralhome.org

To send flowers to the family or plant a tree in memory of Michael Ray "Mike " Harrison , please visit our Heartfelt Sympathies Store.

We encourage you to share your most beloved memories of Michael here, so that the family and other loved ones can always see it. You can upload cherished photographs, or share your favorite stories, and can even comment on those shared by others.

Jamie Walthall, R.D. & Brenda Patterson, and other have sent flowers to the family of Michael Ray "Mike " Harrison .
Show you care by sending flowers

Posted Jul 09, 2021 at 02:01pm
I haven't known Mike for very long, but in the short few years I have known him we became good friends. He will truly be missed. Prayers for the family.
Comment Share
Share via:
NK

Posted Jul 08, 2021 at 02:18pm
Mike is going to be truly missed by us all. Our thoughts and prayers are with you during this most difficult time.
Comment Share
Share via:
GB

Posted Jul 08, 2021 at 09:22am
Mike has been a big brother to me and a very dear friend of Larry Don. He has been part of our family most of our lives . When he moved on Hospital road, he always looked after my mother and never hesitated to call of there was something out of place. Mike will be truly missed by many.
Comment Share
Share via:
KR

Posted Jul 08, 2021 at 12:35am
When I think of Mike, so many memories flood my mind. I am sure it is the same with all of us. We could spend hours sharing them. But there are some descriptions of him that we all can relate to, weather a classmate, friend, teammate, co-worker or family.
First, his big, beautiful smile. It was the first thing people noticed about him. If he wasn’t smiling it meant he was mad, troubled or thinking (with that tongue hanging out of course).
He did not need to be seen to know he was close by. His loud, boisterous, contagious laugh announced his arrival way before his physical presence.
His extraordinary work habits were of such that only a few could keep up with. When it came to football, track, hay hauling, oil-field work, operating a crane, working at the ranch or harvesting animals, ect. Mike could out work three men. Those around him knew better not to slack off. I won’t repeat the endless names he could come up with for those that did. He was the master at giving a relentless hard time.
His nerves, however, were out of control. You knew to stay far away from him before and after his races in high school track. He puked before and after he ran. But that was no sign of weakness. He just had a desire to do the best he could.
He was a loyal teammate. He could be counted on to have the backs of the Healdton Bulldogs football team. Several field brawls were brought on, by #50, The chief. It didn’t end on the field. Numerous, “I got your back”, moments were shared at late night and early mornings gatherings when the “boys were just being boys”. These occasions brought on that forever “flinch” that he so graced us with. Nobody could walk up to him without thinking they were about to get hit.
He loved his fishing and hunting. Maybe because of his Indian heritage, but these were more than a hobby for him, it was a way of life. He was definitely at his happiest when he was “harvesting game” with people he liked.

How about that red “Power Wagon”? Everybody said, “Here comes Mike”, “There goes Mike” when they saw or heard it going down the road. Man, if that thing could talk, what tales it could tell.
He enjoyed cooking, for others, what he killed and grew from his garden. His co-workers, the guys, knew they were going to be well fed when on the job. Cold beer and good food were a must after spending all day working.
Mike was a proud person. Especially when it came to his two girls and grandsons. It was a joy to hear him talk about the accomplishments of Britney and Hallie. He often said they were his biggest accomplishments in life. Grampy was so happy to be able to spend time living with Preston and Braxton. His big grin grew even larger when he spoke about his family.
Mike was not a perfect person by any means. He was stubborn and hardheaded. Many times, this made the ones closest to him very angry. But this characteristic is what allowed him to survive through some tough experiences during his time here on Earth. And perhaps it was these experiences that are responsible for his greatest characteristic that he is known for. His huge heart. Mike loved hard. He genuinely cherished those he cared for. He would do anything, in his power, to help others. It is a cliché, but he would literally give you the shirt off his back. He would say, “I don’t need it.”
How ironic that it was his physical heart that became weak and let him down. Perhaps It was the way he lived life. Or maybe it just could not keep up with the demands he placed on it.
July 4th, the day he left this Earth, is very fitting. He lived an explosive life. Each year the echoes of the Bangs will forever remind us of your boisterous laugh and the bright lights will remind us of your beautiful smile lighting up the surroundings. You are free. 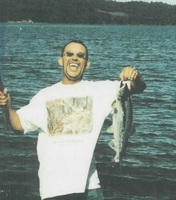 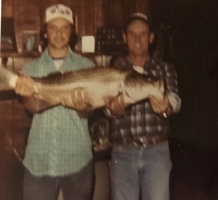