To share your memory on the wall of Connie Wilson, sign in using one of the following options:

Connie passed away on Tuesday, June 1, 2021 at her home in Rock Springs, Wyoming. She was a resident of Rock Springs for the past twenty-three years and former resident of Loco, Oklahoma and Vernal, Utah.

She was born on December 7, 1958 in Ringling, Oklahoma; the daughter of Franklin D. McCleary and Shirley Marie King.

Mrs. Wilson attended schools in Oklahoma, Arizona and California. Connie was a 1976 graduate of Bakersfield High School in Bakersfield, California.

She married Garry Wayne Wilson on June 26, 1976 in Ringling, Oklahoma.

Mrs. Wilson was a bus driver for STAR transit for twenty-three years at the time of her retirement on April 30, 2021.

Her interests included camping, fishing, floating the river, being outdoors and riding motorcycles.

She is preceded in death by her parents, Franklin McCleary and wife Shirley, one brother, Frankie McCleary, two granddaughters, Clover Wilson and Danica Wilson.

The family respectfully requests donations be made in her memory to Hospice of Sweetwater County, 333 Broadway Street, Suite 220, Rock Springs, Wyoming 82901.
Read Less

To send flowers to the family or plant a tree in memory of Connie Wilson (McCleary ), please visit our Heartfelt Sympathies Store.

We encourage you to share your most beloved memories of Connie here, so that the family and other loved ones can always see it. You can upload cherished photographs, or share your favorite stories, and can even comment on those shared by others. 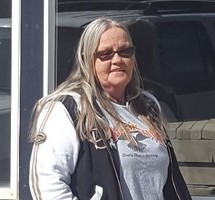