To share your memory on the wall of Evelyn Brock, sign in using one of the following options:

Mrs. Brock was primarily raised in Fox where she attended school and continued to reside. She met and married Richard Murray in 1945 and from this union, she was blessed with five children. Evelyn was an exceptional mother who worked hard to meet her family's needs raising them in Healdton. She was employed for years at Ben Franklin as a retail clerk, before gaining employment at Woolworth's of Ardmore and later at Andy's Easy Stop.

Evelyn met and later married Mr. George Arley Brock on July 31, 1974 at Gainesville, TX. They enjoyed many happy years together, until his passing on Sept 12, 2009. Evelyn always loved working with flowers and enjoyed taking care of her animals. She was a member of the Loco Baptist Church.
In addition to her husband, also preceding her was parents; grandson, Michael Murray; and great great grandson, Brody Archer; sisters, Neoma Ballard, Delphia Nunley, Dora Doss and Norma Newman; brothers, Art, Bill, Pat, Jack and Don Mefford.

Family visitation will be 6pm to 8 pm Monday evening at the funeral home at Alexander Gray Funeral Home of Healdton.

Condolences may be sent www.alexanderfuneralhome.org

To send flowers to the family or plant a tree in memory of Evelyn G. Brock (Mefford), please visit our Heartfelt Sympathies Store.

We encourage you to share your most beloved memories of Evelyn here, so that the family and other loved ones can always see it. You can upload cherished photographs, or share your favorite stories, and can even comment on those shared by others.

Monica Auld, Love, Glenn, Linda, Brian, Ann, Tucker and Cordell, and other have sent flowers to the family of Evelyn G. Brock (Mefford).
Show you care by sending flowers

Medium Dish Garden was purchased for the family of Evelyn Brock. Send Flowers

Posted May 24, 2021 at 10:04am
Prayers for you during this time and throught the coming days. With love Darrell and Robin Smith

Posted May 23, 2021 at 08:20pm
In loving memory of Evelyn Brock. Our prayers, thoughts and sympathy are extended to the family during this difficult time. 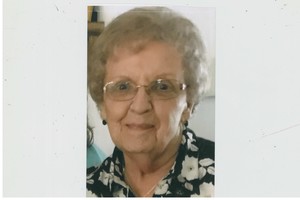